Memo on Social Housing in France

for the attention of the UN Special Rapporteur

Housing associations (known in France as “Organismes HLM”) began to be formed as far back as 1894 with the Habitations à Bon Marché [“affordable homes”];

Their core mission is to build and to buy housing units to provide housing aimed as a priority for economically disadvantaged families.

They provide a public service that is framed by law and that has a twofold aim: to foster the right to housing and promote social inclusion.[1]

They must undergo various technical and financial checks and inspections throughout the performance of their mission, as well audits by a government agency known as Agence nationale de contrôle des organismes de logement social [the national agency in charge of auditing social housing bodies] (ANCOLS). The Housing Associations must moreover earmark any profits that they make to the rehabilitation and the construction of new social housing units.

This is equivalent to 18% of the overall housing market, and compares with a percentage of 24% for the stock of private sector rented housing, in a country where 58% of households are owner-occupiers. One in every two French persons lives or has lived at some point in their lives in a social housing unit.

Composition of the stock of social housing

France’s stock of social housing is used to accommodate households whose financial resources are beneath a certain maximum value.

On average, and for housing units with similar characteristics, the tenants of France’s stock of social housing pay rent that is 40% lower than market rents.

The French Housing Ministry has estimated that the overall savings in terms of buying power procured by social housing amounted to 13 billion euros in 2011.

Characteristics of the stock of social housing

Once average, France’s stock of social housing units features an average level of amenity that is greater than that which can be found in the private rental sector.

The average surface area is greater than that of privately rented housing: the average size of a social housing unit was 67 m2 in France in 2014, versus 57 m2 on average for privately rented housing units. The national average for all main residences, however, was far higher: if one refers to the latest Housing Survey by France’s INSEE, the average surface area of all main residences was 91 m2 in 2013.

France has a population of 66.7 million people. There is intense pressure in terms of the need for housing units, which varies from one district to the next, with high demand in cities and employment centres and low demand in rural areas.

In 2017, 2.1 million households were on waiting lists for social housing.

The allocation of social housing units

The social housing units are allocated subject to the applicants’ income level and their status as lawfully resident in France. The threshold of resources that is applicable depends on such factors as the type of dwelling sought and its location. Some people are defined as priority applicants on account of their personal circumstances.

French law (article L. 411-1 of France’s Construction and Housing Code) defines the categories of applicants that must be considered as a priority for the allocation of social housing. Social housing is allocated as a priority to the following persons:

- persons who are unsuitably housed or economically deprived and who have particular problems in securing housing (due to their financial circumstances or their living conditions or a combination of financial and social integration problems);

- persons who are housed or accommodated temporarily in a transitory establishment or housing;

- persons who are resuming work after a long period of unemployment;

- victims de domestic violence (whether married, civil partners, or live-in partners) where this is acknowledged by a court ruling;

- persons threatened with forced marriage (where this is acknowledged by a ruling handed down by the family courts);

- victims of rape or sexual assault in or around their home. The courts must have imposed upon the perpetrator (suspect, accused or convict) one or more measures in order to protect the victim;

- persons involved in a process of renunciation of prostitution and reintegration into society and the regular labour market;

- persons responsible for at least one under-age child who are housed in cramped conditions or in housing that does not comply with the minimum standards of decency;

- homeless persons, including those housed by third parties;

- persons who are threatened with expulsion without re-housing.

The inalienable right to housing

France’s law of 5 March 2017 instituted an inalienable right to housing (French acronym: “DALO”). This law was passed in response to the affordable housing crisis and the deficient housing situations of a growing number of economically deprived persons, which were brought to light by the Housing Associations in recent years.

The right to decent and independent housing is guaranteed by the State to all persons who are lawfully resident in France and who are unable to access such housing or to retain it by their own means. This right is exercised by submitting an application, and failing this, by resorting to the courts.

The recent changes in society (pauperisation of part of the population, destruction of family structures, ageing, increased vulnerability in the face of contingencies, etc.) have had deep impacts on the missions of social housing bodies. Social housing has become a safety net for isolated and vulnerable households. The maintenance of these households in housing and their access to such housing are backed by intensified social work on the part of the owners of social housing.

Since 2007, the policies of priority access to accommodation for economically disadvantaged persons have been spearheaded by a “housing first” approach. This approach is designed to put an end to the so-called “ladder” approach, which involved putting households through various stages of temporary accommodation before they could gain access to permanent housing. The new policy calls for the mobilisation of a variety of alternative solutions, including the stock of social housing itself and enhanced social assistance measures to foster these households’ access to such housing.

Faced with these changes, the Housing Associations have adapted their management methods so as to foster their most vulnerable tenants’ access to housing and integration into society. The core activity of the Housing Associations is adapting to take into consideration the shifting problems of their tenants and applicants. They have for instance developed their capabilities to anticipate and prevent tenants’ problems by increased vigilance and monitoring of vulnerable households.

The Housing Associations are also committed to producing a diversified range of accommodation and housing that can be combined with social assistance measures for households facing serious social or mobility problems: integration housing, temporary accommodation such as sheltered hostels, social hostels, more long-term formulas such as family hostel accommodation, old people’s homes or hostels for the handicapped. These ventures are most often developed in conjunction with specialised non-profit associations, though in some cases, the owners of social housing units manage them directly.

The “10,000 sheltered housing units” programme initiated in 2014 by the State and the Mouvement Hlm association, backs initiatives spearheaded by Housing Associations that are aimed at fostering the access to housing and maintenance in housing of the most economically deprived households. The aim of this programme is to develop innovative responses that provide a means of durably integrating these households, thanks to suitable social assistance and intensified social management. The programme fosters experimental approaches and partnerships between the Housing Associations and non-profit associations. The programme has given rise to four calls for projects since 2014, which the Housing Associations and their partners have contributed to extensively. Nearly 150 projects have been endorsed, leading to social assistance being provided to some 6,000 households. The programme has brought solutions to households threatened with expulsion, suffering from psychological problems, street sleepers, victims of domestic violence, troubled youth, etc. and has lent impetus to new approaches between landlords and non-profit associations.

The financing of social housing

The financing of social housing is based on 2 primary pillars: “building subsidies”, which are investment subsidies for Housing Associations, and “housing benefit”, i.e. rental subsidies for the households themselves.

The “building subsidies” are subsidies for the financing of the production of new social housing units or the rehabilitation of existing social housing units. These subsidies may consist of straight subsidies, tax exemptions or low interest rate loans. They enable the Housing Associations to invest more than they would otherwise be able to using solely their own funds, to borrow less or at the very least to borrow at the lowest possible cost, and thus to offer reduced rent housing units.

Borrowing is the main method of financing investments in social housing destined for rental. The financial burden borne by the Housing Associations must be covered, together with the other operating costs, by the rents that they charge, which therefore constitute the prime resource for the management of the social housing stock. In 2019, for the first time in the history of social housing, the State stopped contributing subsidies.

The break-even cost of social housing has tended to increase faster that inflation (and faster than the rents themselves) owing to the combined effect of increases in construction costs, a progressive raising of standards and the quest for the best locations, whereas the subsidies did not necessarily keep up with this increase. As a result, the Housing Associations have had to contribute ever more own funds to finance new operations over the past few years.

Since 2017, the system for financing social housing has been affected by the drastic cost-cutting performed by the French government when it comes to housing benefit, cost-cutting that must be compensated across the stock of social housing by a lowering of the rents charged to the tenants by the Housing Associations.

The recent reforms and their impact on the social housing sector

In 2017, the government came up with a new global strategy for France’s national housing policies, including many measures concerning social housing.

In 2018, rent reductions of more than 800 million euros were imposed upon the social housing bodies in order to enable the State to lower the budget for housing benefit. The VAT rate on construction and renovation of social housing was raised from 5.5% to 10%. Overall, these measures reduced the resources of the owners of social housing by 2 billion euros. Come 2020, nearly 6 billion euros will have been sucked from the Housing Associations, affecting their investment potential and their capacity to perform their social obligations.

Whereas the sector invested 17 billion euros in 2017, these measures will have deleterious consequences in the coming years, weakening the economic balances of the Housing Associations by significantly lowering their investment capacity and reducing the production of social housing and the possibility to access home ownership.

The consequences of the decisions taken since 2018 are already being felt throughout the housing industry: a fall in building starts (-4%) and a slowdown in renovations, such as heat insulation (-3% in the last quarter of 2018), more applicants for social housing (2 million). Eventually, the production of new social housing may fall by as much as half, and the renovation of existing social housing units is also expected to fall significantly.

[1] Article L-411 of France’s Construction and Housing Code (CCH) provides that “the construction, fitting out, allocation and management of social housing units destined for rental are designed to enhance the living conditions of economically disadvantaged or low-income persons. These operations help to realise and fulfil the right to housing and contribute to the vital goal of fostering social inclusion in our towns and neighbourhoods”.

[3] For instance, the ceiling income for the allocation of a social housing unit in provincial France is equivalent to a net monthly wage of € 1,900 for a person living alone, and € 3,600 for a household of 4 persons. 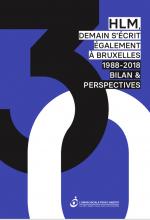